In Case of Fire…

I have been the girliest girly girl for as long as I can remember. My college dorm room literally had a pink glow at night because of the pink Christmas lights that were always on.  My parents tell me I have been very opinionated on what “girls do” and what “boys do” from an early age. On more than one occasion, I told my parents that I could not do certain things because “that’s what boys do.”  There was simply no changing my mind.

When I was 9, in an effort to spend some quality time with me that didn’t include Barbies or Pretty Pretty Princess, my football loving Dad told me he was going to teach me the game.  I am sure that my 9 year old self told him “only boys watch football,” with all the sass in the world, but somehow he convinced me to watch with him. He encouraged me to pick a team and told me we were going to follow the team all year.

We lived in Illinois (Chicago Bear county) so, in true Melissa fashion, I picked the Green Bay Packers. Now for those of you who aren’t fans of the sport, picking the Green Bay Packers in Bear county is basically one of the most offensive things you can do. Did you feel my eyes roll? Ha!  Anyways, I have no idea why I picked the Packers, because no one I knew was a fan, but I had great game intuition (or just dumb luck) because the Packers won the Superbowl that year. That win sealed my fate and I have been a Packers fan ever since.

Last week, Dan and I spent our vacation in Green Bay. I cried the happiest tears when we saw the stadium and basically floated the entire time we were there. It was such an amazing trip. Even if you aren’t a Packers fan, Lambeau Field is really something to see! The week was full of special memories, even if my team made some really ridiculous plays that lost us the game (I promise I’m not bitter)! Even though we had the best time, one of those memories, was one of the most terrifying experiences of our lives!

For our first night of vacation, we checked into a hotel in Milwaukee, Wisconsin. We planned to do a little sight seeing and rest before driving to Green Bay the next day. The hotel we stayed in was really nice and brand new. I honestly think we were one of the first (if not the first) to stay in our room. Hearing the words “Mrs. Forster, you have been upgraded” when we checked in, felt like such a special treat. This vacation was starting right! We spent the evening eating a delicious dinner and exploring a TWO STORY Barnes and Noble (Guys, dreams do come true!) I fell asleep cuddled up by Dan, as he watched ESPN. Best night ever.

Everything about this night was a typical night in a wonderful hotel until, at 2:30 in the morning, we were woke up to the worst noise I have ever heard. Flashing lights and the scariest alarm ever meant THE FIRE ALARM WAS GOING OFF. Dan and I still aren’t sure which one of us screamed first and which one of us sprung into action first, but we both went from 0 to 100 in about 5 seconds. Within minutes I had my glasses on and we were both dressed with wallets and phones in our hands.

As we stood at the door of our room ready to run, I tapped the door handle 3 times to make sure it wasn’t hot (thank the Lord for all those fire drills growing up) and Dan said “Honey, we are going to be okay” or “You’re okay” no less than 487 times. Then we ventured into the hallway and quickly made our way to the stairwell.

Watching the dazed looks on people’s faces as they exited the hotel is something I will never forget. Being woke up at 2:30 in the morning is hard enough, but being woke up at 2:30 in the morning by a fire alarm and then being expected to stand in a crowd of people you don’t know is rough! As I watched person after person leave the hotel, it hit me, the tickets for the football game were still upstairs. In that moment, my world crumbled and I started to cry. Our vacation was ruined. Our tickets would burn. Our suitcases would smell like smoke. Nothing ever goes right for us. Dan grabbed my hand and again said “We are going to be okay”.

About that time I heard the fire truck sirens and saw the flashing lights. Two fire trucks pulled into the parking lot of the hotel and I realized this was really happening. We were going to watch our hotel burn down right in front of our eyes. What we would do? If we showed our burnt suitcases to the Packers will-call office, would they print us new tickets? Would we even be able to get our burnt suitcases? How could we prove our story if we didn’t have the burnt suitcases? 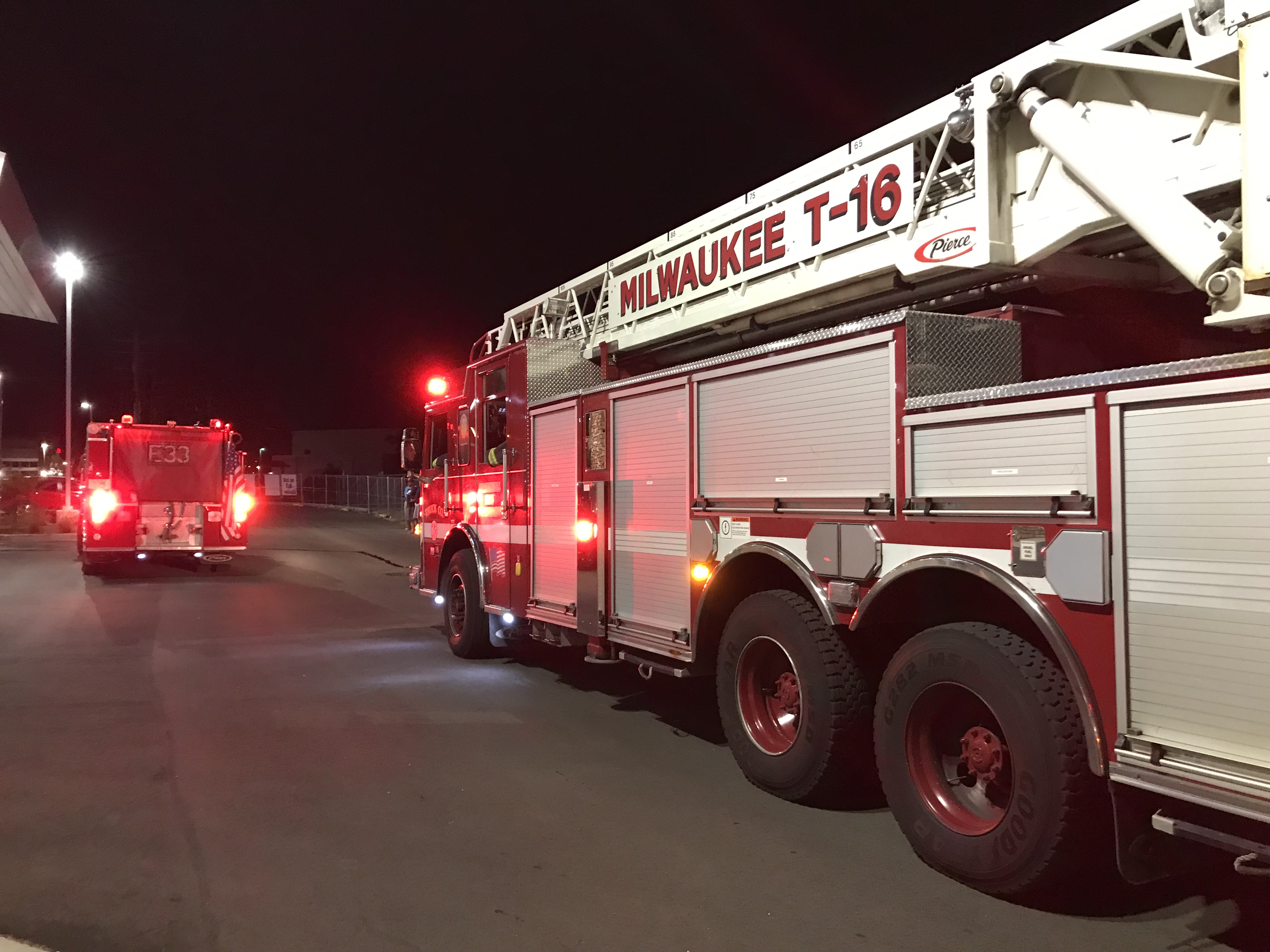 I looked at Dan, he shrugged, and we walked back to our room. Thankfully, the smell he had smelled when we ran down the stairs was just that “new hotel smell”.  What I am even more grateful for… this was not some elaborate ruse to steal our Packers tickets. The tickets were safe and sound exactly where we had left them. After confirming the tickets were fine, we crawled back into bed and stared at the ceiling for several hours until it was socially acceptable to get up and start our day! Okay, so that’s not totally true… but we slept so lightly that the vibration of the alarm in the room next to us woke both of us up a few hours later!

When we checked out, the hotel staff apologized for our adventure and confirmed a guest had pulled the fire alarm. We were never in any danger. After we left, we shared our near death experience with our friends and family and went on with our day. We talked a few times about the alarm, but really, in light of all the fun we were about to have, the alarm going off would quickly get pushed to the back of our minds. 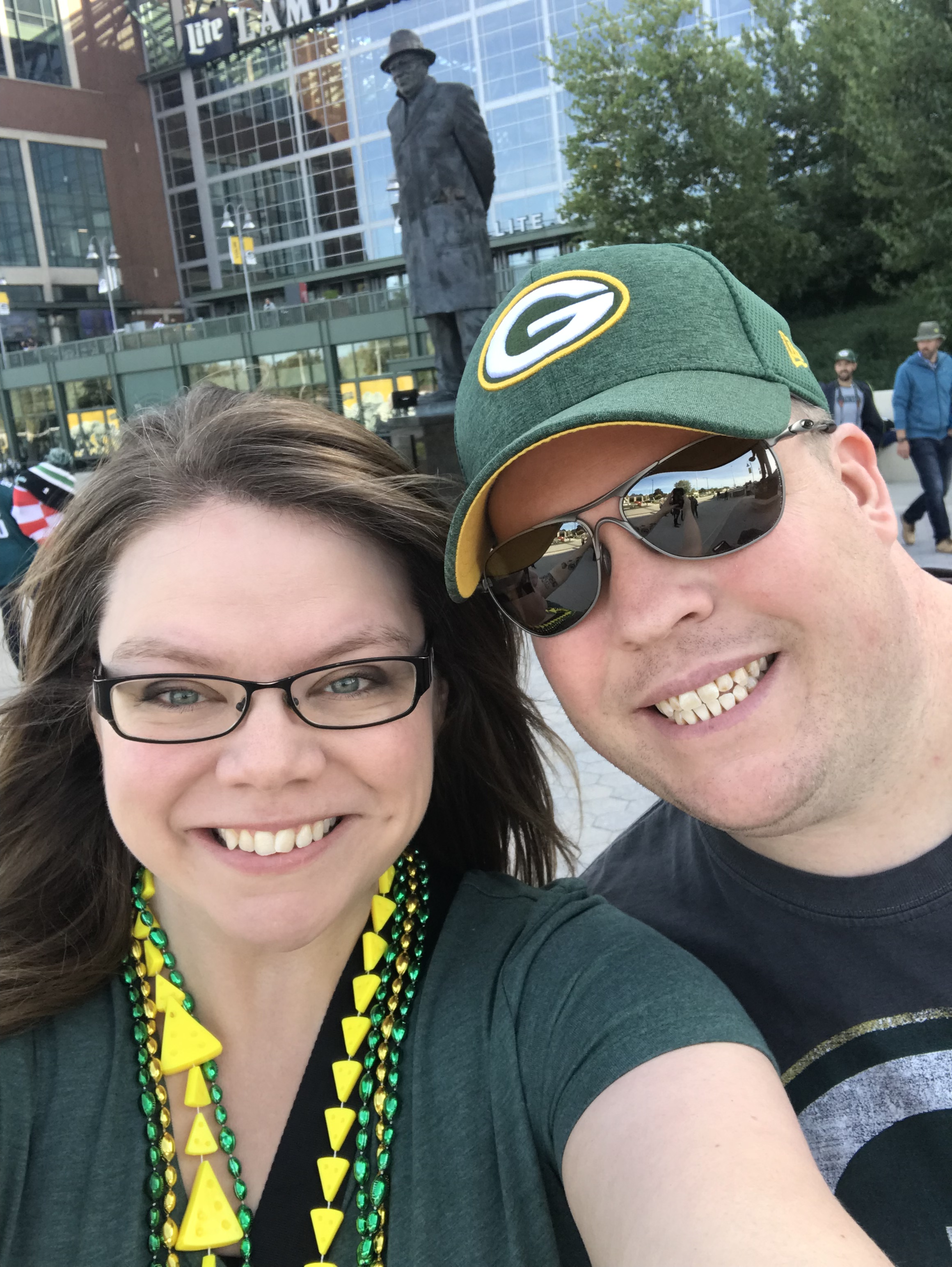 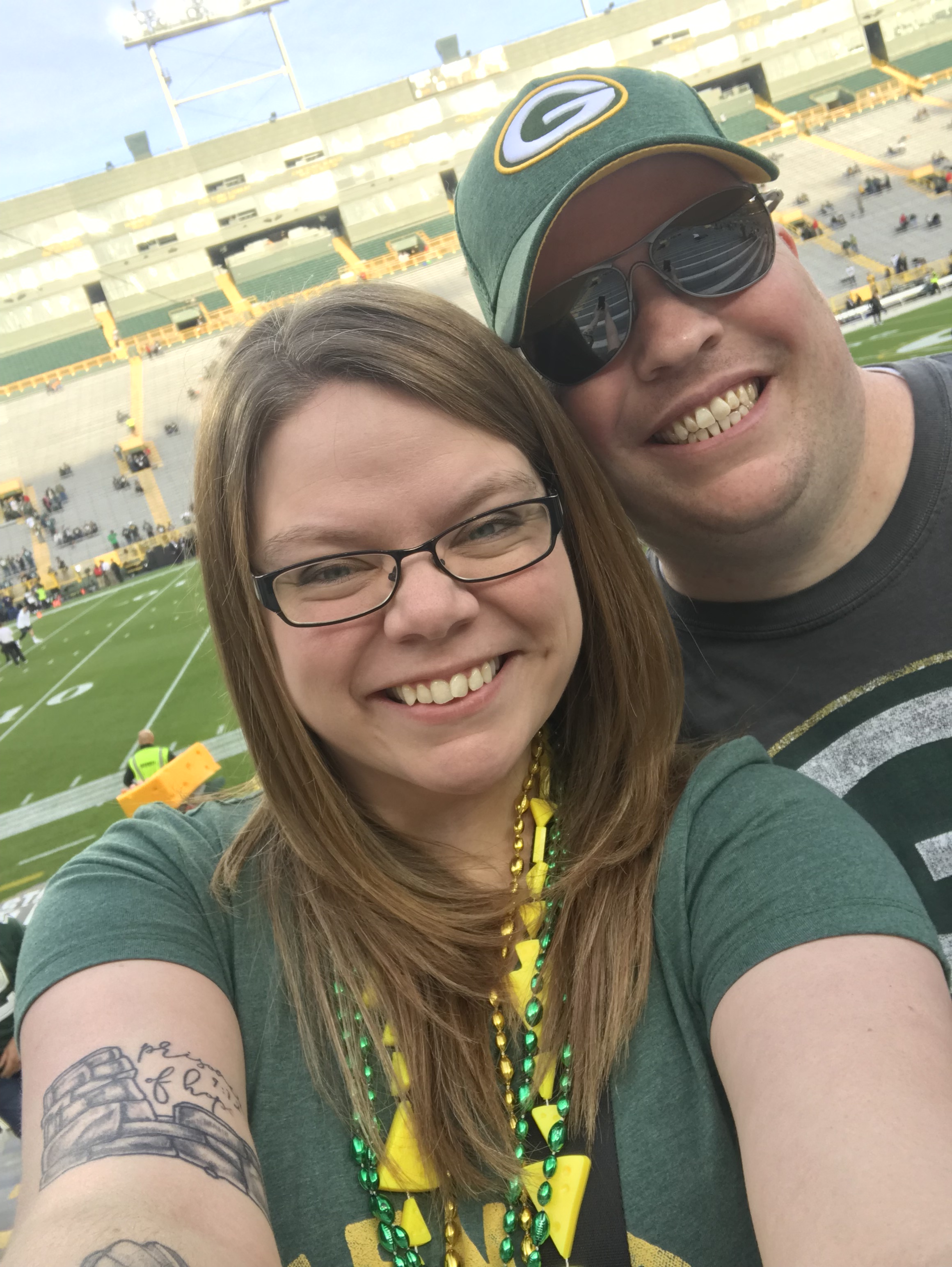 On Saturday, we boarded our flight to go home. As the flight took off, we flew through some clouds that caused the tiniest bumps and it hit me… I wasn’t afraid.  This is a HUGE deal. I have shared several times that flying is NOT one of my favorite things to do. (Letting Go and Dreaming of Living Borderless and A Lesson from an Airplane are just two examples) I started thinking back through the week, and realized I was never afraid. Even when we were minutes from death when the fire alarm went off, I wasn’t afraid.  I mean, yes, I was worried our tickets were gone forever and I was very concerned that our suitcases wouldn’t be okay. I was also very worried our vacation was ruined, but I wasn’t concerned about our safety. Why? Because Dan was with me.

I have mentioned before, that the Father often meets me in the air. As I was thinking through why I wasn’t afraid to be on the plane (or in a burning building… that wasn’t ever on fire), I felt the Father whisper “Why don’t you trust me like you trust Dan?” Ouch.

As we ran out of the hotel, Dan said “we’re okay” 784 times, because he knows me. He knew I needed to hear it. (Let’s be honest, I think he probably needed to hear it a few times too). He grabbed my hand as the plane took off and landed, because he knew I needed the reassurance. There is nothing wrong with finding safety in the arms of my husband, however he had no more in control of these situations than I did. Dan couldn’t have stopped the tickets from burning up in flames. He couldn’t have stopped our things from smelling like smoke. He couldn’t have stopped the plane from crashing. Dan had no more control over any of our situations than I did, but yet, I was less afraid simply because Dan was near me.

“Fear not, for I am with you;
be not dismayed, for I am your God;
I will strengthen you, I will help you,
I will uphold you with my righteous right hand.”

This verse promises the Father is with me always whispering “You’re okay” and holding my hand just as Dan did. He is also strengthening me, helping me and holding me up.

Isaiah 43:1 says this in the ESV translation:

“But now thus says the Lord,
he who created you, O Jacob,
he who formed you, O Israel:
Fear not, for I have redeemed you;
I have called you by name, you are mine.”

This verse promises I can be fearless because the Father created me exactly I how I am. He has redeemed me. He calls me by name. I am His.

“For I am sure that neither death nor life, nor angels nor rulers, nor things present nor things to come, nor powers,  nor height nor depth, nor anything else in all creation, will be able to separate us from the love of God in Christ Jesus our Lord.”

These verses promise that I can be fearless because literally nothing can keep the Father from me. Not one thing can keep Him from being with me.

Friends, I kind of want to stand on a table and preach right now! The God of the universe created me, redeemed me, calls me by name and wants nothing more than to sit with me. He is not just with me, He is strengthening me, helping me and holding me up. Nothing can keep Him from coming for me. I hope you are less hard-headed than me and it doesn’t take a 2:30 am fire alarm to wake you up to how brave He makes you!

So what are you waiting for? Will you accept a challenge to live without fear because of who God created you to be? I can’t wait to hear the adventures the Father takes you on when you say “yes” to living without fear!