I didn’t have a headache today. I know that may not seem notable to most, but in my world it’s a big victory. In mid March, a headache started that would not stop. Some days were worse than others, but for four months the same headache followed me around. I woke up and went to bed with it everyday. It followed me around everywhere, it never left. The day it finally broke, I cried. Big, happy pain free tears.

When the headache first started, I tried to ignore it. It felt familiar to the headaches that came with a condition I battled last year, however I didn’t want to admit it. Finally, I couldn’t ignore the pain anymore and in April I went to my doctor who suggested the condition was back.

As I have described before, Idiopathic Intracranial Hypertension (IIH) is a rare condition where a person’s body creates too much spinal cerebral fluid. The increased fluid creates pressure that causes the optic nerves to swell. The swelling creates pain and, if left untreated, can cause blindness. In November of 2018, a specialist confirmed my body had  No Evidence of Disease. So when the doctor said the condition was back, I was left confused and a little angry. How could I go from having “no evidence of disease” to hearing the word “recurrence” in such a short time?

There were a lot of tears and a lot of questions asked after that appointment.  It was incredibly difficult to believe I was healed – the doctors confirmed there was no evidence of disease – only to have to go back on medication to stop the headaches and protect my vision. Honestly, it felt as if we had lost a very big battle.

In May, we traveled three hours away to the specialist who had said the words “no evidence of disease”. After several tests and several hours of waiting, the specialist confirmed there was not only evidence of IIH, but it was behind both my eyes. Last year, only one eye was affected by the condition, and so we were shocked to learn the swelling was seen behind both my eyes. The news was another big blow.

The past four months have been filled with medication changes, doctor’s appointments and research to try to find a possible explanation for the “recurrence”. However, the medical journey hasn’t been the only thing that has made the past four months feel nearly impossible. Transition at work has led to increasingly stressful days. Medication changes led to kidney stones and then a procedure to remove the stones. Family health and family news seemed impossible to understand. Heartbreaking news and hard situations seemed to be everywhere I turned.

Recently, I learned the dictionary defines wilderness as “an uncultivated, uninhabited and inhospitable region”. Friends, that is exactly what the last four months have felt like. Heavy, dry, untraveled and lonely. I have often heard people refer to heavy periods of their lives as a “wilderness” but, if I am being completely honest, I have realized that I  believed “wilderness seasons” were caused by sin or some choice the person had made. However, while this summer very much felt like a wilderness, I didn’t understand what I had done to create it. So, I spent a lot of sleepless nights asking God what I did wrong and how I caused this wilderness.

I strongly believe our choices do create consequences. For example, if a person drinks, drives and gets pulled over, they will get a ticket (or much worse). If a person continues to choose to drink and drive, that choice can lead to several more tickets, a loss of their licence and hurting themselves or others. Tickets, losing our license and hurting others, are consequences to bad decisions. The consequences of our actions can mark generations. However, God doesn’t give someone a ticket because they chose to drink and drive. God isn’t sitting on His throne giving out timeouts for the choices we make. Our bad decisions break His heart and He doesn’t enjoy watching us deal with the consequences of our bad choices.

Sometimes we have to deal with consequences of other peoples actions that are out of our control. The choice of others can cause consequences in our lives that aren’t our fault. For example, if tonight I get in my car and am hit by a drunk driver, the damage on my car is not my fault. However, even though someone else caused the damage, I would still have to deal with the consequences of the other driver. I would have to get my car fixed or replaced. I also may have lasting scars on my physical body because of the accident.

God’s perfect design for all of us was to live in harmony in the Garden of Eden with Him forever. However, when Adam and Eve ate from the Tree of Knowledge, everything changed. Now, because of sin, we live in a broken world. Bad things happen because of sin. Due to the choice made by Adam and Eve, our world isn’t the perfect design God had in mind. Sometimes, we walk through wilderness seasons because of the consequences of our decisions (like a ticket for drunk driving), but other times we walk through wilderness seasons simply because we live in a fallen world.

Even though I believe this deeply in my bones, it’s funny how quickly I forgot in the midst of my own wilderness. Instead of recognizing that maybe the wilderness was simply because I live in a fallen world, I chose to believe I did something wrong. I searched scripture and tried to apologize for every sin I may have ever committed. I tried to earn my way out of the wilderness by showing God how good I was. How good I could be. Yet, the headache remained, the difficult situations seemed never ending and the wilderness didn’t end. All the searching and apologizing did was make me more tired.

Everything changed one night when after hours of laying in bed wide awake, I read Hosea 2.  In this chapter, the Israelites are in a bad situation. They had sinned and were facing the consequences of their decisions. The bible compares the Israelites sin against Him to an unfaithful wife. They had chose idols and put many other things before Him. Then, in verse 14, something happens and it changed my attitude about my wilderness. Hosea 2:14 says this:

Therefore I am now going to allure her; I will lead her into the wilderness
and speak tenderly to her.

The Israelites had sinned and because of that sin they deserved so many consequences.  Instead of punishment, though, God lead them to the wilderness and spoke tenderly to them. I love the choice of words. God didn’t push the Israelites to come to Him. He didn’t force them or manipulate them. He allured them. When they arrived, He didn’t punish them as they deserved, He spoke tenderly to them.

Then in verse 16, something happens that completely undid me. Hosea 2:16 says this:

“In that day,” declares the Lord, “you will call me ‘my husband’;
you will no longer call me ‘my master.”

When I stopped focusing on why I was in the wilderness, and started to focus on Him everything changed. Everything still felt uncultivated and uninhabited, but it felt more like an adventure than a scary place. I found places of my heart that I still called Him “master”, places that I could grow in intimacy. Places that I hadn’t fully trusted Him to hold. Places that were ugly. Places that lies had grown that needed to be uprooted.

Earlier this year, Amanda Cook released an album called “Awakening”. This album has become my anthem this year (The Awakening and My Comforter). In late March, I boarded a plane to attend the Moms in the Making leadership retreat in Dallas, Texas. My head had been hurting for a few weeks at that point, and I was dreading the plane ride. The headache and planes never played well and I was nervous about how badly my head would hurt when I landed. On the morning that I was supposed to fly, a thick layer of fog covered Springfield. It was rainy and gross and the visibility was so poor. 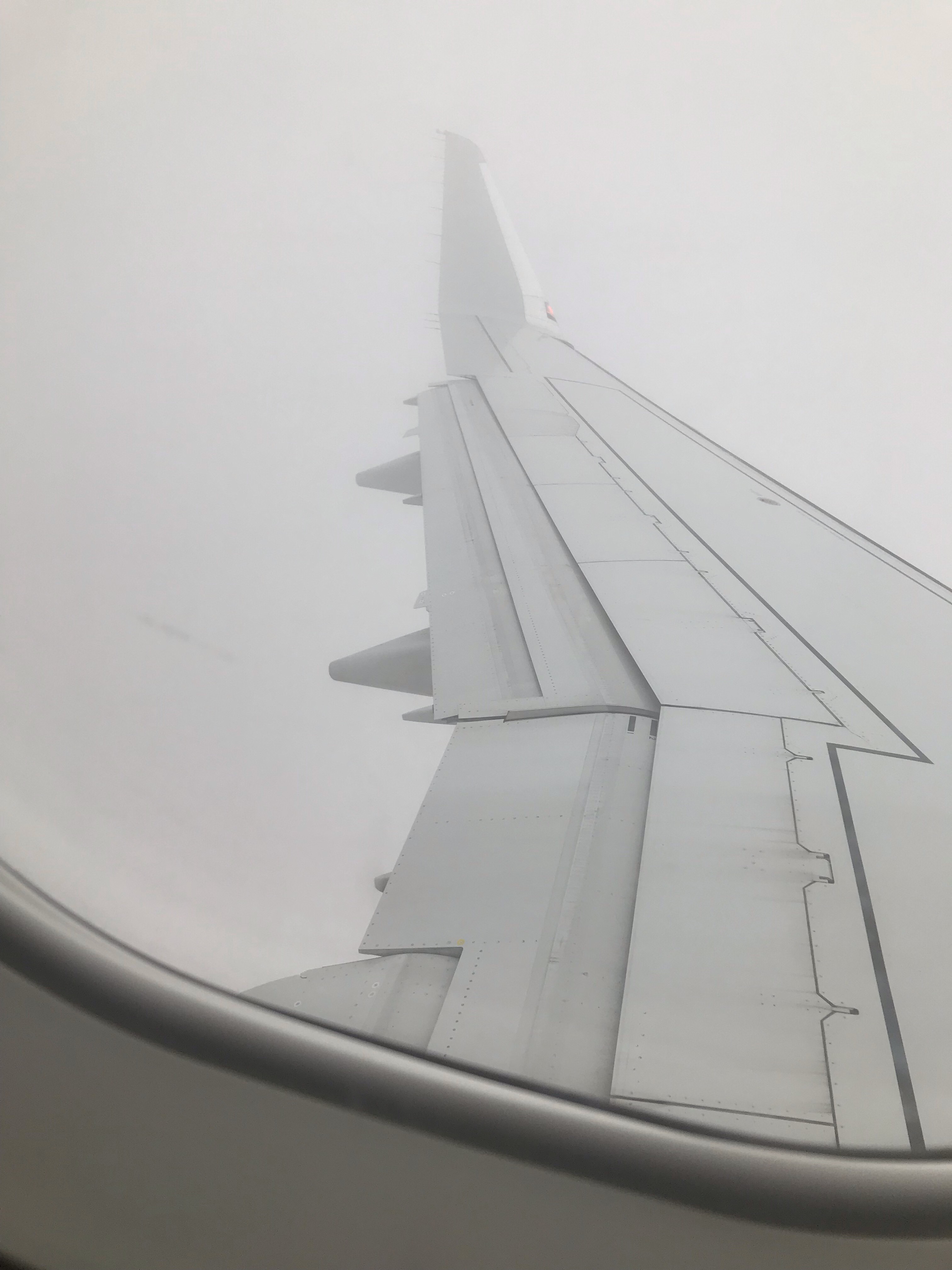 I thought for sure the plane would be delayed. However, I was wrong and the plane took off. Up and up the plane went, smoothly through the clouds until everything was clear. The clouds were beautiful. On the flight, the song “The Clearing” hit my heart in a new way. I listened to it on repeat over and over again savoring the words.

You waited through the night,
Stayed here by my side
Not anxious of the time it takes

You whisper to my soul
Just three steps left to go,
Patiently You show the way

Then, as the plane started to descend, I realized the sun was shining in Dallas. I snapped pictures of the descent, but it wasn’t until just a few days ago that the Father showed me how sweet that flight was. 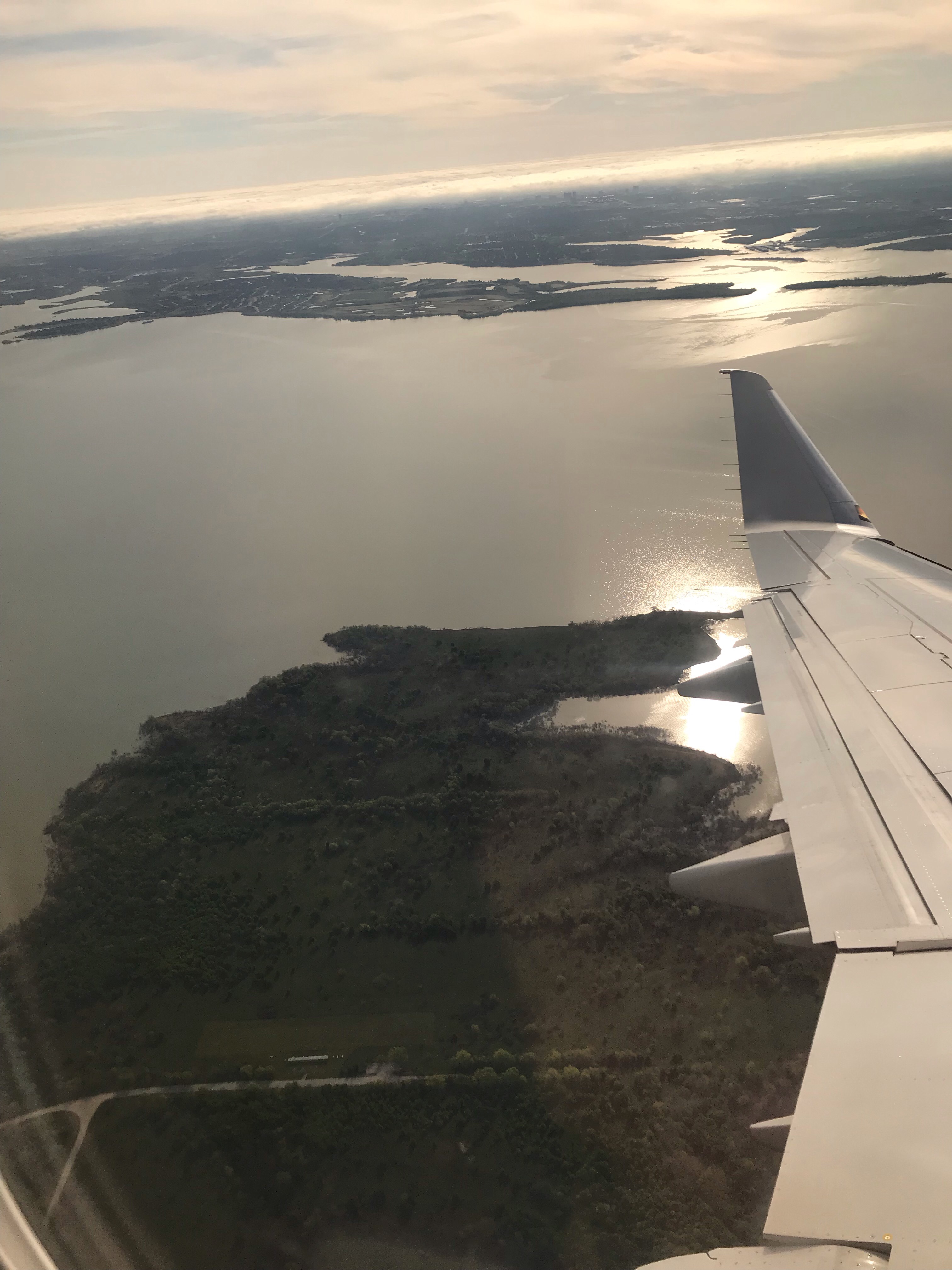 While my headache has broke, I still feel like I’m in the middle of the wilderness. The break has felt like a clearing. It’s a green pasture in the middle of a season that has felt so dry. It’s like that trip to Dallas. Everything about getting on that plane felt wrong, but the pilot knew the way all along. That flight and retreat was the breath I needed before a long season. The Father has been leading me and saying to my heart “just three more steps” all along. He has been alluring me and speaking tenderly to me. This headache break is what my heart needed to finally see clearly. I can now face the rest of this wilderness with confidence.

There is more though. One of the lines in Amanda’s song perfectly describes how my heart feels in this wilderness:

I would never wish wilderness on anyone, however in that wilderness I have found something I would wish for everyone. A gentle hidden place with the Father that feels like a new dance. A place that I have learned the goodness of no longer calling Him master, but learning who He is as husband.

I love the end of Amanda’s song. She sings:

To the ones who feel behind,
Still searching for the light
You’re not out of time, You’ll see

Tonight, I want to encourage you, if you are in the middle of the wilderness (one from your own choice or one that was not in your control), keep searching. He is in that wilderness. The sweet hidden place I have found is not just for me. He longs for you to call Him husband too.

6 responses to “The Summer Wilderness”